Nobody Wins in #DoevRose Case 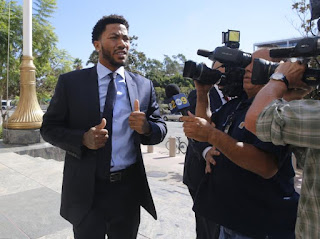 Anyone who knows me, knows that I love basketball and that I am also a die hard Bulls fan.  So, being a Derrick Rose fan comes with the territory.  I was really sad to see the Bulls let him go, but with all the dirty little secrets that came out of this case, I can see why they may have thought unloading Derrick was the best move for the organization.

Nobody wins in DoevRose case

Very special thank you to Julia Marsh from the New York Post for tweeting detailed updates about the case.  Marsh was careful to never voice an opinion but to state facts as they happened, but also recommended lawyers to chime in.

People will walk away from today's verdict declaring that Derrick Rose won.  That's not completely true.  Derrick Rose and his friends were cleared of all charges in the rape case, but did Rose really win?  His name is cleared, well, not exactly.  There will still be the naysayers that say it was his fame that got him off; taking pictures with the jurors after the case was over probably didn't' help either 😐.    While this case wasn't as publicized as the Kobe Bryant case, it was surely more graphic.  We learned things about Rose and his bedroom hobbies that we surely never needed to know.   There goes his privacy.  The time that he had to spend in court took away time from his career and his family.  He missed out on training camp, Pre Season games and team bonding experiences, which are important considering this is his fresh start.   I'm sure the Knicks are happy to have this case behind him and look forward to hearing more about his on the court activities and less about his bedroom activities.  It was also mentioned that he missed his son's 4th birthday, you can't get time back, another loss, but he can take advantage of the time ahead of him and make wise choices that won't compromise his time with him in the future.  Rose and his friends are cleared, but I would hate to see what he paid in lawyer fees, but he was cleared, so I guess it was money well spent.

The Doe of this case, was a female from LA whom was in a past relationship with Rose.  The defendant's lawyer wanted the jury and anyone following this case to see her as a scorned lover; a scorned lover looking for a pay day.  The plaintiff's attorney felt like his client was slut shamed by Rose and his friends as they told graphic details of their joint  interactions.  Looks like Doe lost a lot more than her $21M pay day today.  Her friend, or shall I say ex friend testified against her and painted her as a woman who was a liar and was out to get paid.  This sounds like more than just one bad day.  Doe's character and credibility was brought into question several times throughout this trial.  One juror stated "I felt like she was playing us."  This will set the tone for how people view her, potentially for the rest of her life.  This trial brought out many things about her sexual life that I'm sure she wishes she could have kept secret, it really pollutes the wholesome girl image her attorney described her as.  A psychiatrist diagnosed her as having PTSD and said that she was scarred for life from the traumatic rape encounter.  With today's ruling in favor of Derrick Rose, Doe lost her hopes of becoming $21 million dollars richer, lost friends and gained PTSD.  People will look at her and always wonder if she really told the truth.

I hope that Rose and Doe both walk away from this trial and do some soul-searching.  Both of them lost because they had their images tainted and character questioned.  Rose was cleared of charges, but with what he lost in the process, no one really won today.
Posted by B.M.M.O. Consulting at 10:22 PM