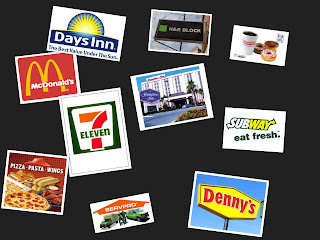 Even though much of the world is in a recession, there are some franchises that have seen great growth in 2011.  We want to share with you those franchises and what strategies, ideas and products brought them their success.  We took the list Entrepreneur put together and gathered the information below.
10. Dunkin' Donuts - Dunkin' Donuts isn't just your typical donut and coffee shop anymore.  This year Dunkin' Donuts decided to concentrate on their breakfast sandwich offering to help increase their profits; they also brought along a few new flavors for their bagel twist.
9. Pizza Hut - Pizza Hut is traditionally known for pizza, wings and breadsticks.  This year Pizza Hut took a risk and ventured into the world of pasta.  This move along with specials on Tuesdays and Wednesdays proved to provide them increased profits for the year.
8. H&R Block - In 2011 H&R Block started offering to file taxes of individuals who had a simple 1040EZ for free.  Their plan behind this was to gain customer loyalty and make them repeat customers.  H&R Block also bought out rival businesses.
7. Denny's - An extensive growth plan was Denny's marketing strategy to increase their profits for the year.  They began by targeting areas where they did not have number 1 & 2 market share, and chose these locations for expansion.  Incentives were provided to franchisees that opened four or more restaurants.
6. McDonald's - This comes to no shock that McDonald's made the list, maybe a little shocking where it falls.  McDonald's has attacked the market at every angle to keep up their profits.  For McDonald's, 2011 was all about getting healthy and updating their technology.  They introduced oatmeal into their menu to compete with the health craze, along with making changes to the kid’s menu to make them healthier.  Technology improvements provided more drive-thru lanes, along with faster service.
5. Days Inn - Expansion, Upgrades and Social Media were the goals for 2011 for Days Inn.  They wanted to design a hotel that will appeal to consumers for generations to come.
4. Servpro - This year has been a year full of weather changes, which has brought great financial gains to Servpro in their damage restoration business.  Servpro's marketing plan is to strategically place themselves in locations so that wherever tragedy takes place, they are ready to deploy and meet the needs of the people.
3. 7-Eleven  - Global domination has been 7-Eleven's plan.  This year they aggressively sought to convert convenience stores and other gas stations to their brand, while also expanding their store-brand offering and upgrading current facilities.
2. Subway - The breakfast game has brought increased revenue to Subway.  When people come in for breakfast, they are also buying lunch; this doubles the value each customer contributes.  In 2012 Subway plans to add more drive-thru locations for increased convenience.
1. Hampton Hotels - Hampton Hotels are number one because they are at the heart of the consumer.  They sit down and talk to their guests, but the most important part is they listen and they implement the information they are given.  Some of the suggestions they took on were in-room Wi-Fi, complimentary breakfast and money back guarantees.  They have also made improvements and expansions to international locations.
One major marketing tool that rang clear with the franchises was expansion.  You have to place your product or service in a place where the consumers can get to it; it's the only way to meet the needs of the people.  The second tool was upgrades, small upgrades can go a long way to provide a new look and attract a new crowd.  These organizations have been very successful at doing both; we are excited to see what 2012's list will look like and the marketing themes that stand out.
Posted by B.M.M.O. Consulting at 12:15 PM