Marketing Highs and Lows of the Week 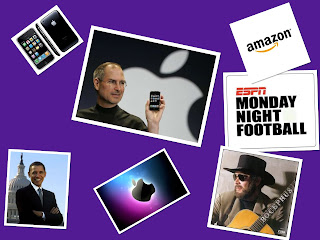 Steve Jobs, a Legacy that will live on
On Wednesday of this week, Steve Jobs, former CEO of Apple and technology revolutionist lost his fight with pancreatic cancer.   Steve Jobs had a long history with Apple, he helped co-found it in 1976 in his family’s garage.  Nine years later he left Apple, but returned in 1996 and had been a major asset to the company ever since.  To Jobs, “Apple is about people who think outside the box, people who want to use computers to help them change the world, to help them create things that make a difference, not just to get a job done.”  Apple wasn’t just a job to him, it was a way of life, a life of challenging the odds and proving that things can change and be accepted.
“My job is not to be easy on people.  My job is to take these great people we have and to push them and make them even better.” Steve Jobs
This quote by far sums up the importance of marketing and meeting and creating the needs of the consumer:
“It’s not about pop culture, and it’s not about fooling people, and it’s not about convincing people that they want something they don’t. We figure out what we want. And I think we’re pretty good at having the right discipline to think through whether a lot of other people are going to want it, too. That’s what we get paid to do.”  - Steve Jobs via CNNMoney
The mark that Steve Jobs leaves here will not just be about the awesome works he did at Apple, but about his drive and desire to be the best and work hard to exceed expectations.
Guess who’s not ready for some Monday night football – Hank Williams Jr.
Since 1989, whenever you heard Hank William Jr.’s song you knew it was time for Monday Night Football.  As of this week, that will no longer be the case.  Williams did an interview on Fox News where he compared President Obama to Adolf Hitler.  It was not an analogy that was taken very highly, it was found to be very offensive and inappropriate.   ESPN and Williams came to an agreement that the song will no longer be used.  William’s said since his freedom of speech rights were violated when he was pulled on October 3rd, he no longer wants to participate and since he owns all the rights, recordings and song, we will no longer hear his voice for Monday Night Football!
Entertainment, music and sound are very important in getting a crowd ready for any sporting event.  But when there is one song that everyone knows it’s time to get ready to play football when they hear it, how amped up will the crowd be without it?  While William’s is entitled to speak his opinion, ESPN is also entitled to protect the image of their brand for current and future business ventures.  Adolf Hitler is not the name you compare a person to when trying to provide them in a positive spotlight.  By comparing the President of the United States to a man such as Hitler seems pretty low.   Williams is a smart man because he completely owns all rights to that song, so they will not be able to use it without his permission.  ESPN can find another song, but the problem is will the fans flock to it like they do this one?  This song has been around for 21 years; let’s see what they bring in to keep the crowd going.
Will Amazon Now Pay Illinois State Taxes?
Amazon has now agreed to pay state taxes in California.  Illinois now awaits to find out if the same will take place.  California, just like Illinois, has been in fights with Amazon and its local affiliates to pay taxes.  Amazon began to cancel contracts with California affiliates.  With new legislation, Amazon has agreed to start paying taxes in 2013 and open large distribution centers in California.  Amazon has severed most contracts with Illinois affiliates, Illinois is now hopeful that Amazon will also decide to pay their state taxes and go back to doing business with its state affiliates.
iPhone 4S, Pass or Fail?
This week a new iPhone was announced, BUT, it wasn’t the much-anticipated iPhone 5, it was the iPhone 4S.  The reviews have been very mixed on how people feel about this “new” phone.  Many consumers are still hungry for the iPhone 5 and are willing to wait it out.  While others are just happy for something new, even if it is the same old thing with a few extra bells and whistles.  It’s an Apple product, so folks will flock to have it, just to say they have the newest Apple product.  There truly is power in a brand, and Apple leads the way.
Posted by B.M.M.O. Consulting at 8:42 AM