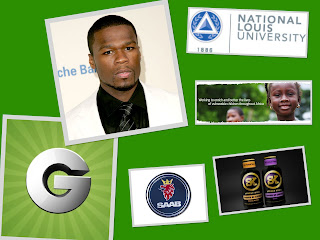 50 Cent’s Road to Feeding Kids in Africa
Most of the time the media only likes to portray rappers as thugs and negative role models.  Rapper 50 Cent is proving to the world that the negative stigmas attached are all wrong in his recent business venture to try to feed 1 billion kids in Africa.  50 Cent took a visit to Africa and was shocked by the famine situation.  He says, “I grew up without money, but I didn’t grow up hungry.”  He feels it is his duty to give back and help those who are less fortunate than him.  50 Cent partnered together with Pure Growth Partner and produced an energy drink called “Street King.”  It comes in orange, mango and grape flavors.  Every sale of Street King will go towards helping feed famine stricken kids in Africa.  Kudos to 50 Cent for giving back in a major way!
Groupon & National Louis University Prepares Future Teachers of Tomorrow
In a recent Groupon coupon deal something strange came up.  An offer to take graduate level classes at 57% less than the actual cost.  Deals 50% off or more are expected on Groupon, but for education???  This was a major shocker.  Education is vital in our society today and Groupon and National Louis University of Chicago have certainly taken notice.  An introductory graduate level teaching course is being offered, it is National Louis University’s hope that by offering such a deal, they can attract more talented teachers to their school.  The total cost of the class would normally run $2,232, but with the Groupon it only costs $950.  Today is the last chance to take advantage of this deal; don’t let it and your future pass you by!
The Future of Saab looks Bleek
Saab, previously owned by General Motors, now by Spyker Cars, may be forced to file for bankruptcy.  They asked the court to grant them protection from their creditors until they completed some financial deals in China, but the court ruled they would not protect them.  Bankruptcy or an 11th hour deal is looking like the only option.  Saab has not paid its employees for work competed in August, and the June and July payments were late.  The union was considering taking action against Saab but wanted to wait until the court’s ruling.  With that now being done, the union may soon be on the doorstep of Saab demanding pay for their workers.  They had to shut down their productions in Sweden back in June because suppliers refused to continue providing them with credit.  Victor Muller, the chairman and chief executive, stated that he plans to appeal the judgment. Time is running out, Muller better come up with a plan soon, or its bye-bye Saab for good this time.
Posted by B.M.M.O. Consulting at 8:30 AM