Marketing News of the Week 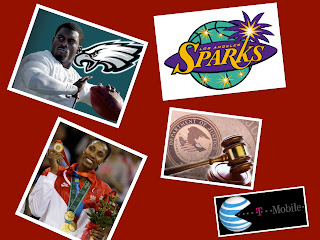 ﻿
Lisa Leslie, Partial Owner of LA Sparks
Lisa Leslie, former WNBA Los Angeles Sparks star is now part owner of the LA Sparks.  She is the first former WNBA player to invest in a team in the league’s 15-year history.  Leslie feels like her career has come full circle, she went from being a player to now a part owner.  Congrats to Lisa Leslie!
Michael Vick is getting Another Chance to Make Things Right
This week the Philadelphia Eagles and Michael Vick reached a 6-year deal that could amount to $100 million.  Is this deal really all its cracked up to be?  Vick still owes $19 million from his bankruptcy case and is only guaranteed $40 million.  If he does not get the full $100 million he will still owe money to his creditors.   Vick had a great career start; he was drafted number 1 in 2001.  He had a rough middle with the dog fighting problems, but he is now getting his life back on track and staying out of trouble.  We wish Michael Vick much success as he continues to redeem himself as an individual; he has already proven the skill is still with him.
Is the AT&T and T-Mobile Merger in Danger?
Back in March the announcement was made that AT&T would be buying T-Mobile for $39 billion.  Well the Justice Department has decided that maybe this isn’t such a great idea.  The government believes that these two companies combined would harm competition and raise prices for consumers.  AT&T argues that by having more towers it would improve wireless service quality and expand high-speed wireless Internet service across the US.  They don’t mention anything to combat those pricing concerns though.  If this deal fails AT&T is the biggest loser, or are they?  They will have to pay $6 billion cash to T-Mobile and other benefits if the deal does not go through.  Deutsche Telekom has been trying to dispose of T-Mobile USA for at least two years now.  So what does that say about the future of T-Mobile?  The AT&T buyout might not go through and Deutsche Telekom really doesn’t want it, what’s the next plan for getting rid of T-Mobile USA?  Neither of these outcomes seems like a good idea.  Some speculate that there will be a Sprint/T-Mobile merger.  Either way, looks like Deutsche wants to unload T-Mobile and might try anything to do so.  Hold on T-Mobile customers, change might be on the way.  Only time will tell if is a good or bad change.
Posted by B.M.M.O. Consulting at 8:19 AM